The New Nazis of Europe: Coming to America? 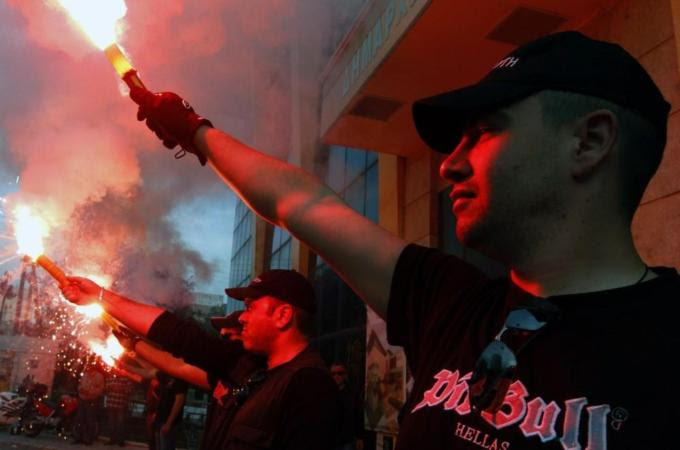 The resurgence of Nazi and neo-Nazi movements in Europe is attracting more attention in the United States. The New York Times featured the activities of the Golden Dawn, an explicitly neo-fascist, neo-Nazi political party that has become the fifth largest party in the Greek Parliament, with every prospect of getting bigger. Golden Dawn focuses on illegal immigration from Africa and Asia, in the context of brutal austerity measures that have affected the standard of living of almost everybody. It's a toxic brew, and there's more of it coming.
There have been similar organized upsurges across Europe. Notable examples are efforts to provide public pensions to surviving members of Hitler's Waffen-SS in the Baltic states, a variety of outrages in Germany, and the God-awful mass murder in Norway by a self-professed right-wing vigilante. There has been a growing recognition by mainstream European political forces that these incidents can no longer be shrugged off as fringe manifestations. The semi-meltdown of the European economy, the austerity measures demanded by banks, the world-wide interest in Islamic extremism, and the influx of immigrants of color have all contributed to the increase in incidents and organizations of the very far right.
The European response has come largely from Russia. Russia has both internal problems with neo-Nazi groups, and a national political interest in focusing on their growth in the Baltic states. In domestic terms, the Russian people, having lost 24 million souls to the fight with Nazi Germany, are vigilant and concerned by anything smacking of a Nazi resurgence. An organization has been created, World Without Nazism by a Russian Senator, Boris Shpiegel. It has been meeting largely in Russia, but On October 9 it's convening in Strasbourg France, the home of the European Union, with a line up of heavyweights (the former president of Ukraine, lots of members of Parliaments, and a delegation from the US among others) and an intention to upgrade it's efforts in Western Europe and maybe the USA.
I attended two meetings of WWN in Moscow and came away convinced that there's enough going on to make their work important. It's certainly possible that when the economy recovers the public tolerance of neo-Nazi movements will vanish. But if there's any lesson to be learned from history, it's that we are better off erring on the side of concern before things take off.
The American interest in this is both obvious and hidden. The useless slaughter and cost of World War II is still know to Americans, if only by our interest in the Greatest Generation and its sacrifices. Our ability to fight our old enemies of anti-Semitism and racism is complicated when today's exponents of that stuff are elected to office and command the streets. And it's not as though the new neo-Nazis are leaving us alone. Golden Dawn has opened an office in Washington, and some of what we've heard from the Baltic states should give the State Department pause. Even the Timothy McVeigh's decision to bomb government buildings still resonates among some extreme right-wing groups.
All in all, and even in the midst of a hot and contentious Presidential race, it's worth paying attention to. World Without Nazism may yet try to open a dialogue with Washington, that's to be decided in Strasbourg. I'm going, to listen and to explain something of America's history and attitude towards Nazism. With good luck, these new movements will melt away in the face of better economic conditions and public opposition. But better safe than sorry.