'Island of the Blind' Riles a Greek Public Facing Cutbacks 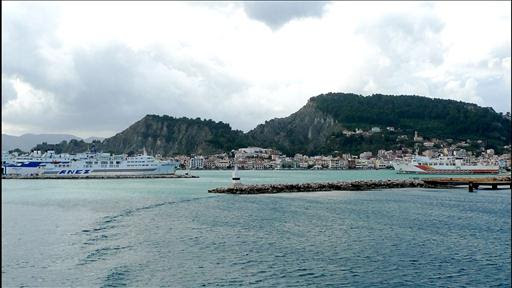 Greek authorities are investigating implausibly high disability claims for blindness on the island of Zakynthos--including a taxi driver and a bird hunter. WSJ's James Angelos reports on a story of corruption in the face of economic austerity.
The island of Zakynthos, long known for its Venetian ruins and turquoise waters, lately has new fame in Greece—as "the island of the blind."
The Greek health ministry is investigating on Zakynthos after local officials flagged records showing what they said is an implausibly high number of disability claims for blindness.
About 1.8% of the island's population of 39,000 claimed the benefit last year, according to the health ministry. That is around nine times the prevalence of blindness estimated for many European countries in a 2004 study published in a World Health Organization journal. 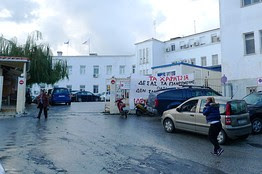 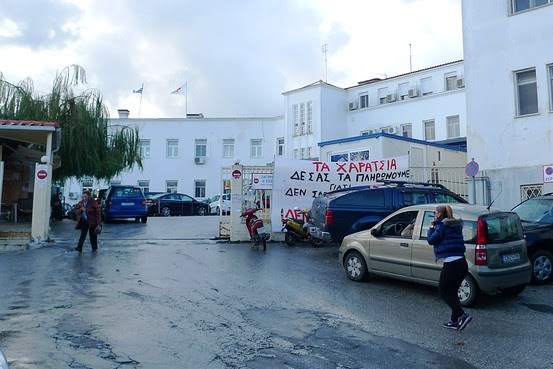 James Angelos/The Wall Street Journal
St. Dionysios General Hospital on the Greek island of Zakynthos.
Among those who put in for the blindness benefit on Zakynthos, a local official said, were a taxi driver and a bird hunter.
Zakynthos has become a symbol for the widespread corruption that has played a part in the nation's financial downfall. "It appears the 'blind' of Zakynthos saw only the color of money," said an article in the Greek newspaper Ethnos.
But the island is hardly alone, according to health ministry officials, who say fraudulent disability claims are a problem across the nation, costing the government hundreds of millions of euros a year.
Greece, under pressure from international creditors, is stepping up efforts to fight corruption and cut costs. Yet the crackdown on disabilities fraud, muddied by allegations of political gamesmanship and inaccuracy, demonstrates the difficulties in such attempts at overhauls.
Some disability recipients coming under scrutiny complain they have few options as austerity hits home in a country where pensions and wages are increasingly meager.
Zakynthos Mayor Stelios Bozikis on a Greek television talk show said residents angry about the benefits crackdown and other financial overhauls pelted him with yogurt at a recent event. He said he considered this "an honor."
In an attempt to root out fraud, the Greek health ministry recently required disability claimants nationwide to register in a centralized database, appearing in person or sending a representative. The registration resulted in 36,000 fewer disability claims than in 2011, the health ministry said.
The ministry alleges these dropped claims were fraudulent, in many cases reflecting multiple claims for the same disability or payments in the name of dead beneficiaries. It also alleges that some doctors accepted money for false diagnoses and some local politicians signed off on the benefits to win support, and said it is giving public prosecutors information about areas where it suspects a high level of fraud. Only 190 of the nearly 700 people it says had been collecting the blindness benefit on Zakynthos participated in the registration, the ministry said. 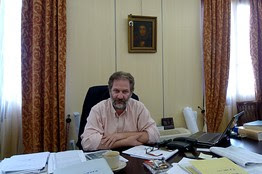 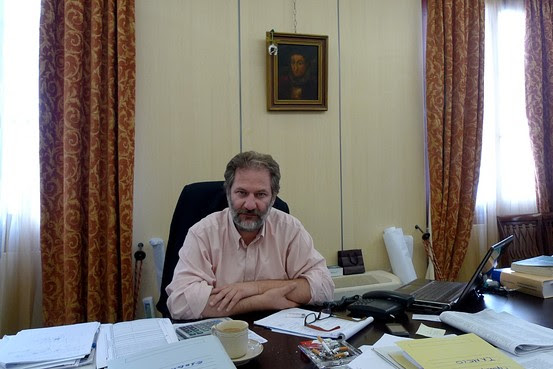 James Angelos/The Wall Street Journal
Mayor Stelios Bozikis
Even as government officials herald efforts to clamp down, some people worry the campaign risks stigmatizing the disabled as images of people in wheelchairs and others using white canes dominate news coverage. "The portrayal of persons with disability in the mass media has been absolutely unbearable," said Yannis Vardakastanis, president of Greece's National Confederation of Disabled People.
Deputy Health Minister Markos Bolaris, who took the post last summer, said the new program is aimed at allowing the nation's limited resources to reach those who have real need. Previous Athens administrations should have caught the fraud, he said. "If it didn't matter to some before, for us today, it must matter."
Some local and national officials pin blame on the island's former prefect, Dionysios Gasparos, whose signature was required to authorize the payments. Mr. Gasparos denied culpability and accused the deputy health minister of "political games." He also blamed the ophthalmologist at the island's public hospital, Nikolaos Vartzelis. "I am not the one who puts you down as blind," Mr. Gasparos, said. "The ophthalmologist does."
In late March, Dr. Vartzelis resigned. He said he was ready to retire and rejected accusations that he made false diagnoses or accepted money in return for signing off on unwarranted benefits.
In an interview before he stepped down, Dr. Vartzelis stood by his decisions. "There are cases of some people who don't have a shoulder to lean on, they didn't have bread to eat, and maybe there we practiced every leniency," he said. "We were lenient, but within the limits of the law."
He blamed political rivalries for the publicity over the blindness benefits. "You should know that Zakynthos is a very beautiful island," Dr. Vartzelis said. "It has a lot of good qualities. But it's an island of gossips."
Shortly after the Zakynthos mayor, Mr. Bozikis, took office at the beginning of 2011, an adviser, Timotheos Zontos, acquired a list of those receiving blindness benefits. Recognizing some names, he said he knew something was amiss when he saw a taxi driver and a bird hunter. "You can tell if someone is blind," Mr. Zontos said.
An office of the mayor, which said it was acting in cooperation with the national health ministry, last summer sent letters ordering most of those collecting the benefit on Zakynthos to an Athens hospital for vision tests. The mayor said he suspended payment of blindness benefits on the island at that time, with the exception of those who could provide proof from a second doctor.
About 100 people from Zakynthos went to the Athens hospital, several hours' journey from the island, and around 40 proved legally blind, the health ministry said. A person close to the situation at the hospital said the tests showed slightly more than 50 were blind.
The low turnout for the test at the Athens hospital "means the others aren't [blind] and are hiding," Mr. Bozikis said. 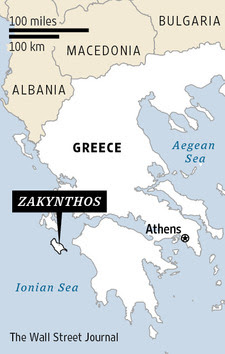 One elderly woman on the island, speaking in the kitchen of her house near a grove of olive trees, said she can barely live on her monthly pension of about €300 ($400) without the blindness benefit, which had paid €724 every two months plus perks such as discounts on her electric bill. She said she can see but also complained of problems with her eyes.
Asked how she secured the benefit, she spoke of the importance of the rousfeti, a term for reciprocated special favors. Asked whether she paid a bribe, she didn't answer.
Exactly who on the island continues to collect a benefit for blindness—and why—remains foggy. Greece's national health ministry said it had nothing to do with the suspension. Officials in the island's office of Public Health and Social Solidarity, which put the number of blindness claimants slightly lower than the ministry, said more than 200 are getting payments.
Late last year, 40-year-old Klavdianos Dionisios rushed into the island's public health office, saying his elderly uncle's blindness benefit had been suspended unfairly. "My uncle has no money," Mr. Dionisios said. "He has no house! Should we let him die?" One of the office workers, a middle-age woman, burst into tears.
Mr. Dionisios said a test in Athens proved that his uncle is blind. The person familiar with the eye-exam results at the Athens hospital confirmed that. The mayor said those who were proven blind are getting their payments. But the Dionisios family said that by late March the benefit still hadn't been restored.
http://online.wsj.com/article/SB10001424052970203370604577263863362854348.html
Posted by M. Η. Μ. at 7:13 π.μ.