The truth about Greek Porsche owners 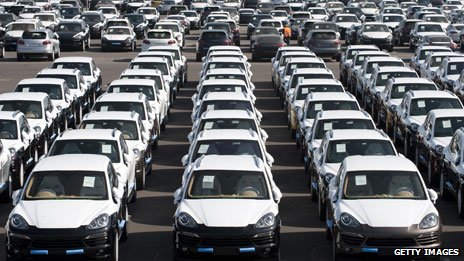 The euro crisis has prompted a slew of stats and one-liners presented as truth. But how accurate are they?
The full extent of the financial problems in the eurozone's struggling economies is sometimes hard to grasp.
That's why a neat, one-sentence illustration or an easy-to-remember statistic can spread among the media like wildfire.
This is especially the case if it fits a certain narrative - for example, that an economy is doomed to fail because of its profligacy.
Three widely reported statements have stood out.
Tens of thousands of chauffeur driven cars are available to Italian politicians, there are more Porsche Cayenne owners in Greece than taxpayers earning more than 50,000 euros (£41,260), and half of Spain's youth are unemployed.
So which of these is a fact and which is not?

One of the many eye-catching claims made about Greece was about the number of Porsche Cayennes.
"A couple of years ago, there were more Cayennes circulating in Greece than individuals who declared and paid taxes on an annual income of more than 50,000 euros, a figure only slightly above the vehicle's list price" is a quote widely reported in mainstream media and on blogs worldwide.
It came from Prof Herakles Polemarchakis, a former economics adviser to the prime minister of Greece, and now a lecturer at Warwick University in the UK.

More or Less: Behind the stats

Listen to More or Less on BBC Radio 4 and the World Service, or download the free podcast

But when asked, Prof Polemarchakis said his remark was casual, based on what had been circulating in policy circles in Greece a few years back.
He said the only hard fact he was aware of was "the per capita number of Cayennes in [the Greek city of] Larissa was twice that of Cayennes in the OECD countries".
So what are the facts?
In 2010, there were 311,428 people with declared incomes of more than 50,000 euros (£41,260) paying tax in Greece.
It was a figure that made a spokesman at Porsche laugh. Lukas Kunze says the story is "ridiculous". In total, they had only sold around 1,500 Porsche Cayennes in Greece since the launch of the luxury car nine years ago.
But this doesn't mean that Greeks all pay the right amount of tax.
Income tax receipts as a percentage of GDP are only 4.7%, the lowest in the eurozone and less than half the 10% in the UK.
It would be good to think this is just because Greece has rock bottom tax rates but it hasn't - this is because for some people, what they actually earn and what they put on their tax forms are often different figures.
Last year, Horst Reichenbach, head of the EU taskforce offering technical help to the Greek government, said the amount of unpaid tax was estimated to be "in the order of 60bn euros [£49.49bn]".

'We want to work, let the businessmen who have got rich from our labour pay for the crisis' says the graffiti
This figure has been criticised by some economists in Spain who say it doesn't show the full picture. As with Greece there is a sizeable shadow economy in Spain which is where some of the young people are working.
But which came first, the under-the-counter working or the unemployment?
Professor Freidrich Schnieder, an expert in shadow economies from the University of Linz in Austria, says that the unemployment probably caused the growth of the shadow economy, not the other way around.
Spain's youth unemployment compares badly to the rest of the eurozone, where the average is 21.5%. Economist Elvira Gonzalez says this is in part due to a high school drop-out rate.

"In the years of the bubble, young people found good earning jobs in the construction sector, that's why they left school. And when in 2007-08 the construction bubble burst, unemployment rose enormously among these young people."
Young Spaniards are now staying on in education for as long as they can. This is why that alarming figure of 50.5% youth unemployment might even be understating the problem. Along with those registered as unemployed, there are others who would like a job but aren't officially unemployed.
This all comes down to the definition of who is unemployed, which is a standard set by the International Labour Organisation. Unemployed people are those aged 15 to 74 who have been actively seeking work in the past four weeks.
People who have not searched for work in the last four weeks are deemed to be outside the labour force.
Last year, the ILO decided to recalculate the figures from 2010 when Spain's youth unemployment rate was at 41%.
They calculated that if you took into account people who had looked for work in the last 12 months, then youth unemployment was around 10 percentage points higher, at more than 50%.
There is some debate over whether these figures really represent the unemployed.
The ILO say that some are simply "hiding out in education" or living off their parents.
But are these people really unemployed, or not? It's hard to say.
But it is clear that as the number outside the labour force grows, the unemployment figures start to tell us less and less about the true picture of those out of work.

Another car-related number that was widely reported said that Italian politicians "are chauffeured around in expensive Alfa Romeos, Maseratis and Audis with tinted windows. There are a staggering 30,000 of these executive cars and they cost the Italian taxpayer an estimated 2bn euros a year."
This was repeating what was attributed to the minister of public administration in Italy at the time.
A review by the Italian Government, prompted by these reports, found that there were 72,000 vehicles operated by central, regional and local governments in Italy.
The majority are service vehicles - pool cars, vans and lorries used for things like maintenance, deliveries and for staff to get around.
So when you strip these out, you are left with 5,000 chauffeur driven cars for exclusive use of politicians and executives and 10,000 other cars with chauffeurs.
http://www.bbc.co.uk/news/magazine-17702226
Posted by M. Η. Μ. at 9:32 π.μ.