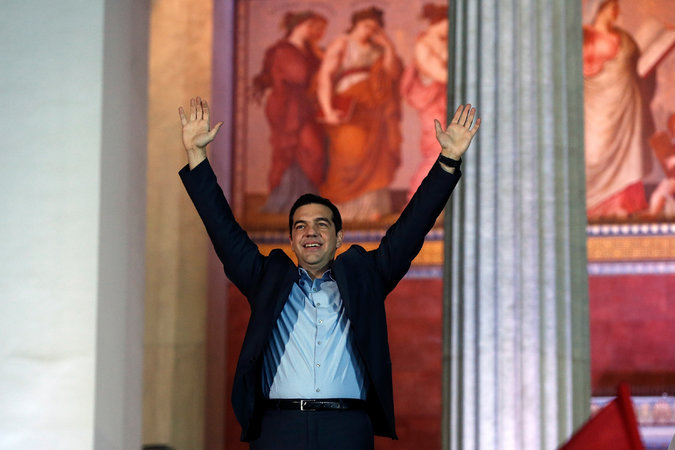 Alexis Tsipras, leader of the Syriza party, celebrating on Sunday in Athens. Mr. Tsipras has promised to force creditors to renegotiate the terms of Greece’s bailout.CreditPetros Giannakouris/Associated Press

By JIM YARDLEY and LIZ ALDERMANJAN. 25, 2015ATHENS — Greece rejected the harsh economics of austerity on Sunday and sent a warning to the rest of Europe as the left-wing Syriza party won a decisive victory in national elections, positioning its tough-talking leader, Alexis Tsipras, to become the next prime minister.
With almost 98 percent of the vote counted, Syriza had 36 percent, almost nine points more than the governing center-right New Democracy party of Prime Minister Antonis Samaras, who conceded defeat. The only uncertainty was whether Syriza would muster a parliamentary majority on its own or have to form a coalition.
Appearing before a throng of supporters outside Athens University late Sunday, Mr. Tsipras, 40, declared that the era of austerity was over and promised to revive the economy. He also said his government would not allow Greece’s creditors to strangle the country.

“Greece will now move ahead with hope and reach out to Europe, and Europe is going to change,” he said. “The verdict is clear: We will bring an end to the vicious circle of austerity.”

Syriza’s victory is a milestone for Europe. Continuing economic weakness has stirred a populist backlash from France to Spain to Italy, with more voters growing fed up with policies that require sacrifice to meet the demands of creditors but that have not delivered more jobs and prosperity. Syriza is poised to become the first anti-austerity party to take power in a eurozone country and to shatter the two-party establishment that has dominated Greek politics for four decades.
“Democracy will return to Greece,” Mr. Tsipras said to a swarm of journalists as he cast his ballot in Athens. “The message is that our common future in Europe is not the future of austerity.”
Youthful and seemingly imperturbable, Mr. Tsipras has worked to soften his image as an anti-European Union radical, joking that his opponents had accused him of everything but stealing other men’s wives. On the campaign trail, he has promised to clean up Greece’s corrupt political system, overhaul the country’s public administration and reduce the tax burden on the middle class while cracking down on tax evasion by the country’s oligarchical business class.
But his biggest promise — and the one that has stirred deep anxiety in Brussels and Berlin as well as in financial markets — has been a pledge to force Greece’s creditors to renegotiate the terms of its financial bailout, worth 240 billion euros, or about $267.5 billion. Squeezed by policies intended to stabilize the government’s finances, Greece has endured a historic collapse since 2009; economic output has shrunk by 25 percent, and the unemployment rate hovers near 26 percent.
While setting up an imminent showdown with creditors, led by Chancellor Angela Merkel of Germany, Mr. Tsipras has argued that easing the bailout terms would allow more government spending. That, he said, would stimulate economic growth and employment as well as help the Greeks who are most in need.
“Tsipras won because those who imposed austerity never thought about the effects of such drastic policies that impoverished millions of people,” said Paul De Grauwe, a professor at the London School of Economics and a former adviser to the European Commission. “In a world where people are so hit, they just don’t remain passive. Their reaction is to turn to the politicians who will change the process.”

Mr. Tsipras will face immediate challenges. Greece is waiting for a €7 billion bailout payment needed to keep the government running and to pay off billions in debt obligations due in the coming months. Mr. Tsipras has demanded that creditors write down at least half of Greece’s €319 billion public debt to give the country more breathing room for a spending stimulus.
“This is a turning of a page, a historical moment for all of Europe,” Yiannis Milios, the chief economist for Syriza, told reporters. “The Greek people are taking their future into their own hands.”
Europe “cannot go on with deflation, recession, increasing unemployment and over-indebtednesses,” he said. “Greece points the way. Our country, our people, are the groundbreakers of a very big change.”
A Syriza victory would lift hopes elsewhere for parties that are critical of the European Union, especially in Spain. There, the left-leaning, anti-austerity Podemos party, which is less than a year old, already is drawing 20 percent support in national opinion polls. The leader of Podemos, Pablo Iglesias, joined Mr. Tsipras last week for Syriza’s final campaign rally.
“What the whole debate about Greece and Syriza highlights is that voter anxieties, voter resentment and electoral disillusionment over austerity policies can be expressed at the ballot,” said Jens Bastian, an economic consultant based in Athens and a former member of the European Commission’s task force on Greece. “The example of Greece today may become a precursor to what happens in other countries like Spain, Portugal or Italy.”
Mr. Tsipras has said he wants to negotiate directly with Ms. Merkel and other European leaders to reduce Greece’s debt burden. Some officials, however, have characterized Mr. Tsipras’s demands as unrealistic and rife with potential to drive Greece toward default — or even out of the eurozone, the group that shares the currency.

Earlier concerns that a Syriza-led Greece would abandon the euro have been fading, but Mr. Tsipras’s confrontational stance on renegotiating the bailout could create a game of chicken with Greece’s creditors. Mr. Tsipras has insisted that he will not adhere to the bailout’s austerity conditions; Greece’s creditors insist that they will not disburse funds unless he does.
Mr. Tsipras has pledged immediate action, including restoring electricity to poor families who were unable to pay their bills. He has promised to raise the minimum monthly wage to €751 from €586 for all workers, restore collective bargaining agreements, prohibit mass layoffs and create 300,000 jobs.
Jens Weidmann, president of Deutsche Bundesbank, the German central bank, warned that Greece would remain dependent on outside financial support and that the new government “should not make promises that the country cannot afford.”
“I hope the new government won’t call into question what is expected and what has already been achieved,” Mr. Weidmann said in an interview with Germany’s public broadcaster.
On the streets of Athens, voters expressed a range of emotions as they went to the polls.
At a polling station in Mets, a middle-class district near central Athens, Achilleas Mandrakis, 47, said he runs a garage but has been struggling since his wife lost her job at a shoe store. “I always voted New Democracy, and I never trusted the leftists,” he said. “But enough is enough, really. We kept giving them a chance, but they messed up. They’ve made our lives miserable.”

“At least,” Mr. Mandrakis added, “a different party might change something in this mess, anything.”
In a brief news conference late Sunday, Mr. Samaras vowed that his party would continue to play a role in Greek politics and defended his government. “I received the country at the edge of a cliff,” he said. “I was asked to take burning coals into my hands, and I did it.”
Mr. Samaras said that Greece had moved away from deficits and recession and that his government had “restored the credibility of the country.”
For Syriza, the immediate question was whether the party would win the 151 seats needed for a majority in Parliament. Projections suggested a close final result. If he falls short, Mr. Tsipras might align with the Independent Greeks, a center-right fringe party that opposes austerity measures and might push for a harder line in any debt negotiations.
Early returns also showed the neo-fascist Golden Dawn party in third place with roughly 6 percent of the total vote, even with some of its leaders campaigning from prison, awaiting trial on charges of being in a criminal gang.
While Greece sees itself as being punished by creditors’ demands, Germany and a host of European officials have argued that Greece and other troubled nations in the eurozone must clean up the high debts and deficits at the root of Europe’s crisis. They say Athens has failed to make enough progress on structural reforms seen as necessary to stabilize the economy, and they are pressing Greece to raise billions of euros through more budgetary cutbacks and taxes.
Many analysts say Mr. Tsipras must moderate his campaign promises and take a more centrist approach if he wants to save the economy and keep Greece solvent. “That will be the best possible outcome for Greece and for Europe, because it would show that these protest movements ultimately recognize reality — which is that they are in the euro, and they have to play by the rules,” said Jacob Funk Kirkegaard, a senior fellow at the Peterson Institute for International Economics in Washington.
Otherwise, he warned, “things could get a lot worse.”
“Very, very quickly,” he added.